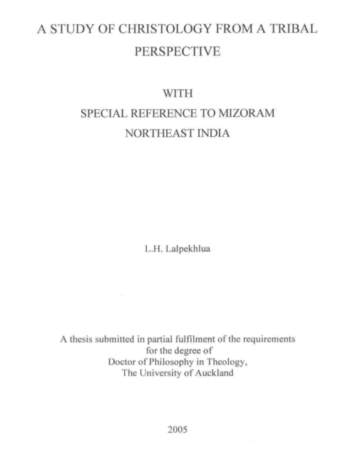 A study of Christology from a tribal perspective: with special reference to Mizoram, northeast India

This thesis seeks to interpret Christology from the perspective of tribal people in Mizoram, northeast India, with an objective to help them and their churches to understand Jesus Christ in a way meaningful to them. In this study, historical and socio-theological analysis is used to show that Christology and culture are always related, and that different Christologies have been developed in different cultural contexts. This analysis in turn helps identify the issues that must be addressed in the construction of a contextual Christology for Mizoram context. In this study, Mizo culture and experience are taken into account as essential theological source. The first chapter discusses the need for a contextual Christology and examines the basic issues and methodological approaches surrounding the construction of contextual Christology. In the second chapter, the context of tribal people in Mizoram is analysed. Among the major issues that must be addressed in Christological construction, the thesis identifies the growing disparity between rich and poor within the state and the socio-economic alienation of Mizos from mainland India. The third chapter surveys the Christological tradition in Mizoram from its beginning to the present. It finds that the Christological heritage in Mizoram is largely irrelevant to Mizo people because of its uncritical application of Western theology to this very different historical and cultural context. The idea of Christ introduced into Mizoram is basically individualistic, otherworldly and dualistic. Neither missionaries nor native church leaders have taken the local culture seriously into account in doing Christology. The fourth chapter attempts to recover some major liberating cultural traditions of the Mizos as sources for Christology, including their concepts of pasaltha, humanity, land, God and spiritual beings, and life after death. The study reveals that, despite the Western overlay, there is a significant continuity and influence of traditional culture in Mizo Christianity. On the basis of these findings, the fifth chapter seeks to reinterpret the significance of Jesus Christ in the Mizoram context, using a Mizo conceptual framework. It argues that the idea of the pasaltha incorporates much of the New Testament portrait of the person and work of Christ, Jesus’ self-giving life and ministry, incarnation, suffering and death on the cross, can all be seen as manifesting the principle of tlawmngaihna, which is an essential characteristic of the pasaltha. Jesus’ resurrection and exaltation can be seen as God’s response to Jesus’ person and work precisely as pasaltha-tlawmngai. Similarly, the kingdom of God, which defined and summed up Jesus’ message and mission, can be perceived in the Mizoram context as exhibiting the qualities of a communitarian society.

Be the first to review “A study of Christology from a tribal perspective: with special reference to Mizoram, northeast India” Cancel reply