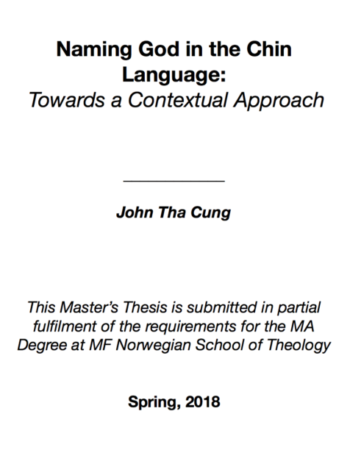 Naming God in the Chin Language

“Naming God in Chin Language: Towards a Contextual Approach” is a research paper done on the theological understanding of the Chin traditional names of God, “Pathian and khuazing”. The main research question seeks to find the proper name for God in Chin language amidst concepts developed by the Christian Missionaries to the Chin people who were behind either the creation or adaptation of the name of God for native Christian Chin people. The supporting research question is why the present Chin Churches are still using only the missionaries’ concept of God, Pathian, not the traditional concept of the Supreme Being, khuazing. The other research sub-questions are asking about the concept of Pathian and of khuazing. The research also intends to find the reason why the missionaries to the Chin people used Pathian as the name of God instead of khuazing which was the traditional name for God.

The research is done among the Hakha Chins and the names are confined to the Hakha-speaking Chin dialect. The aim of this study is not to compare and to contrast each other but to explore the local national theological understanding of God’s name in the Chin language whereas some of the present Chin people are still using khuazing for the name of God in spite of the exclusion from the Hakha Chin Bible as the name of God. This thesis also traces the differences and similarities between Pathian and khuazing in order to find the rudiments of fundamental theological foundations for naming God in Chin.

In a nutshell, the research explores some issues on reasons of the use of Pathian relative to the disappearance of khuazing as the name of God in Chin. Some of the issues can be addressed as the missionary negligence or insensitivity towards Chin traditional religions and their local identity. Lastly, the research finds that the Chin people are ready to use khuazing as the proper name of God interchangeably and along with Pathian: khuazing Pathian or Pathian khuazing, but not to replace Pathian. This finding is a basic and theological fundamental foundation for naming God in the Chin language towards a contextual approach towards the future Chin name of God.