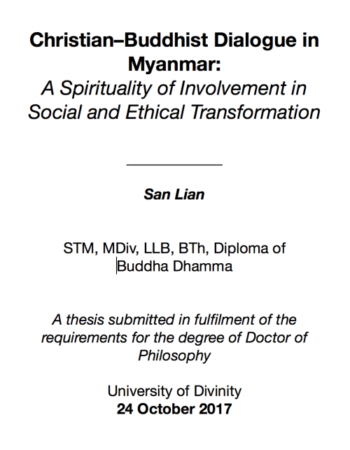 Christian–Buddhist Dialogue in Myanmar: A Spirituality of Involvement in Social and Ethical Transformation

This thesis examines the possibility of promoting Christian–Buddhist dialogue in Myanmar, where both Buddhists and Christians (especially those of the Protestant churches) have neglected and avoided interfaith dialogue up to the 21st century. In Myanmar, differences in faith and ethnicity tragically lead to religious marginalisation, violence and ethnic conflict. In this unstable situation, politicians exploit an amalgam of hatred, mistrust and fear rooted in ethnic religiosity, which often fuels the anger of defensive religious leaders. In response, this thesis advocates for the promotion of interfaith dialogue based on socially engaged spirituality for Myanmar people at the grassroots level, which may in turn lead to moral and social transformation.

The thesis explores the core messages of the Buddha and Jesus Christ, as enshrined in the Four Noble Truths and the Sermon on the Mount, with a special focus on the Noble Eightfold Path and the Eight Beatitudes. Conceptually, the thesis advances interfaith awareness based on the documents of Vatican II, the Federation of Asian Bishops’ Conference and the World Council of Churches. The researcher uses the narrative method of theology, integrated with the analytical interpretive method used in missiology. The thesis aims to peacefully address socio-religious evils from the perspective of dialogue, and to uncover relevant and feasible ways to bring peace and social harmony to the broken, fear-ridden hearts of the suffering people of Myanmar.

Be the first to review “Christian–Buddhist Dialogue in Myanmar: A Spirituality of Involvement in Social and Ethical Transformation” Cancel reply