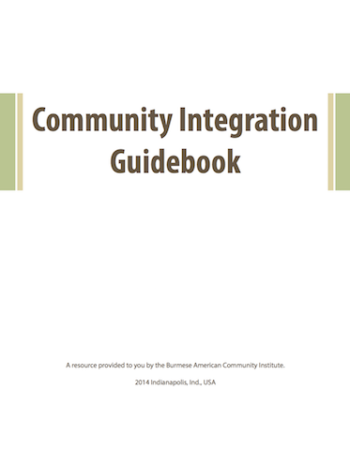 Approximately 10,000 refugees from Burma have become a growing part of the Indianapolis community in recent years. The refugees came to join a new society under the U.S. Refugee Resettlement program. According to the U.S. Department of State, the U.S. resettlement program reflects the country’s highest values and aspirations of compassion, generosity and leadership. Since 1975, Americans have welcomed over 3 million refugees from all over the world. Refugees have built new lives, homes and communities in towns and cities in all 50 states (USDOS/PRM). The state of Indiana hosts one of the largest Burmese refugee communities in the US. Approximately 15,000 Burmese refugees currently live in Indiana. Of them, about 73 percent found their new home in Central Indiana while about 27 percent reside in Fort Wayne and elsewhere in the state. Ethnically, about 80 percent of the total Burmese refugee population in Central Indiana is Chin. We are grateful and thankful to the American people and Hoosiers for welcoming us as we start new lives with them. At the same time, we recognize various challenges and obstacles that newcomers face as they join a new society with different language and culture. However, we do not want to become a population that relies upon public assistance for a long period. We are fully convinced that it is our responsibility and opportunity to step up and assist our community members with their long-term self-sufficiency so that they become contributing citizens of their new society. With this conviction and philosophy, the Burmese American Community Institute (BACI) was established in 2011 with a mission to build a thriving, self-sufficient, and integrated Burmese community in Indianapolis through advocacy, education and employment. To ensure additional support is provided to refugees that encourages long-term economic self-sufficiency and integration, and with a vision of education for all, BACI has developed and implemented various advocacy and educational programs in the past two years. One of them is the Inform, Navigate, and Direct You Program (INDY), under which the Community Integration Guidebook is one project. The guidebook reflects our belief and philosophy of two-way-street engagement and its reciprocal benefits in the integration process as well as providing culturally and linguistically appropriate services. Accordingly, the material is being translated into Burmese and Chin so that all refugees have access to it. The topics include understanding American culture, property and garden care, how to be a good neighbor, cooking and home safety, fishing safety, online and physical safety, domestic violence, substance abuse, minor laws, the importance of good moral character as a citizen, mental health, personal health/hygiene, and the Bill of Rights. As part of our comprehensive approach and effort in cultural and community integration, we intend to disseminate the materials and information through a series of workshops throughout 2014 in collaborative partnerships with the Chin Community of Indiana (CCI), local churches, and experts in each of the subject areas. Finally, I admit that the Guidebook project has been quite a huge undertaking. As much as we would like to produce the highest quality possible, the book will still be treated as a work-in-progress, and therefore may be revised in accordance with feedbacks, suggestions, and expert opinions received. Nevertheless, we have a high and sincere hope that many newcomers will find the Community Integration Guidebook helpful and that it will bring a positive and long lasting impact on the process of their economic self-sufficiency and community integration in the United States.

Be the first to review “Community Integration Guidebook” Cancel reply