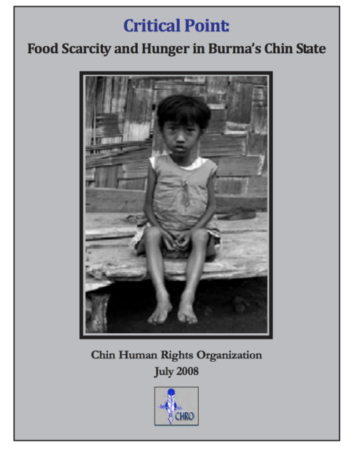 “The military regime of Burma has been consistent in their inability and unwillingness to protect and provide for the people of Burma. Burma’s human rights record provides testimony of decades of widespread violations and abuses perpetrated largely at the hands of Burma’s military rulers and their agents against the Burmese people. Dissent is regularly silenced and opponents brutalized. In a country once known as the “rice-bowl of Asia,” Burma is now one of the poorest countries of Asia due to steady economic deterioration driven by the regime’s mismanagement. Many in Burma live without access to proper schools, healthcare facilities, reliable electricity, safe drinking water, and stable food supplies. Cowed by policies of extreme oppression and tactics of intimidation, life for much of the population in Burma is a struggle for daily survival. Add to that a natural disaster- and survival in Burma reaches a critical point. Western Burma’s Chin State is at such a point. Since 2006, the region has been plagued by a severe food crisis following a steep reduction in the local harvest and food production. The year 2006 marked the beginning of a new cycle of bamboo flowering, which occurs about every 50 years in the region, triggering an explosion in the population of rats and resulting in the destruction of crops. This has caused a severe shortage of food for local communities primarily dependent on subsistence farming through shifting cultivation. The phenomenon has been documented three times since 1862, and each past event ended in a disastrous famine for the communities in the area. Compounding the impending food crisis in Chin State due to the bamboo flowering is the continuation of severe human rights violations and repressive economic policies of the military regime, which serve to further undermine the livelihoods and food security of the Chin people.

The use of unpaid civilian forced labour is widespread throughout Chin State, which consumes the time and energy of local farmers and reduces their crop yields. The regime also forcibly orders farmers to substitute their staple crops for other cash crops, and has confiscated thousands of acres of farmland from local farmers for tea and jatropha plantations. Meanwhile, arbitrary taxes and mandatory “donations” collected from Chin households by the Burmese authorities total up to as much 200,000 Kyats a year in major towns.2 This includes the unofficial collection of money from the Chin public by officials in various government departments at the local level to support such programs as tea and bio-fuel plantations; and extortion and confiscation of money, properties, and livestock by military units stationed at 33 locations across the state. The rising cost of living and skyrocketing food prices is also adding to the already dire humanitarian situation in Chin State. In the last four years, the price of rice has quintupled from 6,000 Kyats a bag in 2004 to as much as 30,000 Kyats today, an amount equivalent to the monthly salary of entry level public servants.

The humanitarian consequences stemming from the dying bamboo and exacerbated by conditions imposed by the regime are enormous, and there are clear indications that unless urgent action is taken to address the crisis, the situation could soon turn into a large-scale catastrophe affecting all parts of Chin State. The hardest hit areas are in the southern townships of Matupi and Paletwa where bamboo grows heavily, but reports suggest that severe food shortages are a state-wide phenomenon with many villages in the northern townships of Tonzang and Thantlang, for example, having already run out of food supplies. Based on the latest field surveys conducted in the affected areas, Chin Human Rights Organization (CHRO) estimates that as many as 200 villages may be directly affected by severe food shortages associated with the bamboo flowering, and no less than 100, 000 people or 20 percent of the entire population of Chin State may be in need of immediate food aid.3 Food scarcity is more severe in remote areas, where families are being reduced to one meal a day or have nothing left to eat at all. CHRO recently visited four border villages in India’s Mizoram State where it found 93 families from 22 villages in Paletwa Township, Chin State who fled across the border in search of food.

To date, Burma’s State Peace and Development Council (SPDC) has done nothing positive to counter the food scarcity, nor has the SPDC provided any kind of help to communities affected by the food crisis. Repeated requests by affected communities for food aid were denied, even as 100,000 metric tonnes of rice was exported to Sri Lanka.4 Rather, Burma Army soldiers have seized food aid donated by private donors and church groups.5 In contrast to the situation in Burma, India’s Mizoram and Manipur States, both adjacent to Chin State, are facing a similar food crisis related to the bamboo flowering, and have received millions of dollars in aid from the central government as well as international aid agencies, including USAID of the United States government, to support emergency programs to combat and manage the food crisis.

In early May, when Cyclone Nargis ripped through lower Burma and the Irrawaddy delta destroying entire regions of land and leaving thousands homeless, hungry, and helpless, the regime clearly demonstrated their complete indifference to the plight of the Burmese people. In response to this natural disaster, they did shamefully little to ease the suffering of the victims and much to hamper relief efforts. As a result, the people of Burma paid a heavy price in the loss of life and continue to struggle under a regime that fails to protect or provide for its people. As another natural disaster unfolds in western Burma without hope of internal protections or provisions, the Chin people, like the cyclone victims, will be sure to pay a heavy toll unless action is taken immediately.
The critical point for action is now.