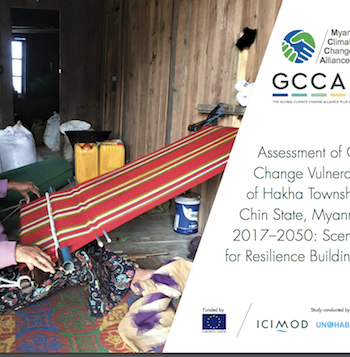 Myanmar is among the world’s most vulnerable countries to natural hazards. The rugged and fragile terrain of its hilly and mountainous northern region and the remoteness of the northern states make this part of the country particularly vulnerable to disasters, resource scarcity, and the impacts of climate change.

The people of Myanmar are regularly exposed to multiple climate-induced disasters such as flash floods and landslides, droughts, and strong winds. Limited access to infrastructure and dependence on climate-sensitive sectors such as rain-fed agriculture, which has low socio-economic returns, further weakens their ability to withstand and recover from shocks.

There is strong evidence that climate change is affecting Myanmar. These changes will continue to impact the country over the coming decades, and unless urgent action is taken at national, regional, and local levels, people will suffer disproportionately. The International Centre for Integrated Mountain Development (ICIMOD), with guidance from the Ministry of Natural Resources and Environment Conservation (MoNREC) and in collaboration with UN-Habitat, conducted a comprehensive study in Hakha Township, the capital of Chin State, Myanmar, to assess the vulnerability of its ecosystem, infrastructure, and socio-economic conditions in relation to present and projected climatic conditions. The findings of this study indicate an increase in temperature by +1.5–2.7°C, increased number of hot days (17 days/year), fewer rainy days, and an increase in total annual precipitation by 23% under RCP 8.5 by 2050. The potential impacts of these changes include heavier rains and floods, more heat waves, stronger winds/storms, and increased drought. Due to these climate events, more frequent landslides, loss of farmland and crops, human health issues, increased pest and disease infestations in crops and animals, water shortages, and the destruction of houses, roads, and other infrastructure are foreseen.

Considering these predicted impacts, Hakha Township needs urgent adaptation planning supported by strong scientific analysis and evidence that will help build its resilience. This report provides insights into the need for building the resilience of Hakha Township. These insights hold true for most other hilly states in Myanmar.

ICIMOD supported the MCCA in filling gaps in Myanmar’s earlier Local Adaptation Plans, which looked at the coastal and arid zones – by contextualizing a vulnerability assessment framework for uplands and hill states, as a step towards preparation of Myanmar’s NAP. The work was done under the Support to Rural Livelihoods and Climate Change Adaptation in the Himalaya (Himalica) Initiative, which was funded by the European Union.

We believe that the framework applied in this report, which specifically analyzes vulnerability to climate-induced disasters such as landslides and flash floods, will contribute to making Myanmar’s ongoing NAP process more comprehensive.