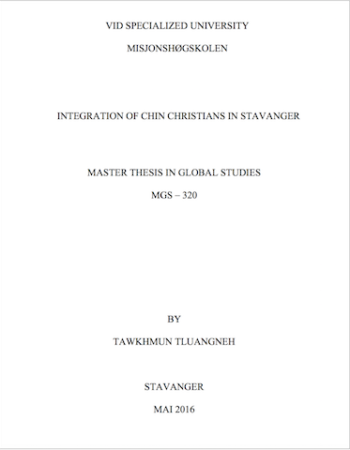 Integration of Chin Christians in Stavanger

Context of Immigration for the Chin in Stavanger

The first Chin Christians arrived Stavanger on October 14, 2003 (Thang 2014, 36). This happened with the help of the Government of Norway and the United Nations High Commissioner for Refugees (UNHCR) in Malaysia. Since the Government of Norway has been active in helping refugees, the population of the Chin people in Stavanger has increased to 258 now. Stavanger is therefore the city in Norway with most Chin people, and it is often called by the Chin themselves ‘the capital city of Chin’. The Chin people are one of the several ethnic groups in the state of Myanmar, and they represent a Christian majority. They live in the west part of Myanmar and count about half a million inhabitants, but there is also another half-million Chin who live outside the Chin state. The reason for migration is due to the war between the Chin National Army (CNA: a political underground movement) and the Military junta since 1988. In order to find a safe place, more than 200 000 Chin fled to India and Malaysia under the protection of UNHCR. After that, with the help of the Norwegian Government, some of them were selected to resettle in Norway; not by application, but by consideration of vulnerable criteria according to UNHCR. At the present, there are about 1800 Chin in all of Norway. “Stavanger is an international city. The percentage of immigrants and Norwegian-born with immigrant parents total 21,1% of the population whilst the national average is 14,9% (SSB [Statistics Norway] 01.01.14). The population of Stavanger was 130,754 at the turn of the year (2014), of which 27,531 are immigrants.”