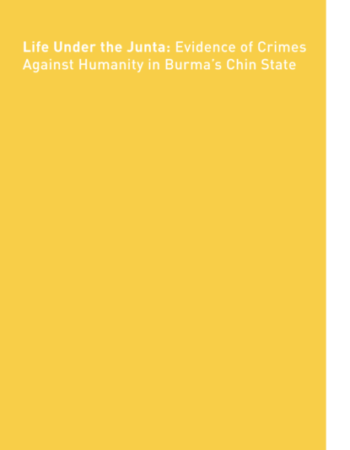 Life Under the Junta: Evidence of Crimes Against Humanity in Burma’s Chin State

The many peoples of Burma have suffered long and hard under decades of military misrule. Burma’s diverse ethnic nationalities, courageous clergy of all faiths, principled democratic opposition, and generations of students and citizens have struggled mightily against dictatorship and oppression. Their struggle continues. The unfree and unfair electoral exercise conducted by the ruling military junta in November of 2010 has neither alleviated Burma’s ongoing political crisis nor addressed the suffering of her people.

We greatly welcome the recent release of Daw Aung San Suu Kyi from house arrest after spending 15 of the last 21 years in illegal detention. But Burma is not yet free. Daw Suu Kyi’s heartfelt call for dialogue and national reconciliation has thus far gone unheeded by Senior General Than Shwe and the regime he controls. Burma’s authoritarian system, with all the harms it has generated, remains intact.

It has long been clear that ethnic nationality peoples in Burma’s border regions have faced particularly brutal treatment under military rule. Too much of their suffering has been deliberately hidden from the world by the regime’s control of access to these troubled regions. While the horrors of military rule in Eastern Burma have been better known and documented, we know much less about Burma’s Western regions, including Chin State, on Burma’s border with the Indian State of Mizoram. The Physicians for Human Rights report you hold in your hands is the first independent and population-based assessment of the health and human rights situation across Chin State. We urge you to read it carefully, and to consider its implications seriously, for this report evidences extraordinary levels of state violence against civilian populations. It demands not only attention, but reparative action by all who are concerned with Burma’s peoples, their well-being, and Burma’s future as a functioning state.

PHR and its partners, including courageous members of Chin organizations, used innovative methods to conduct population-based assessments across all nine townships of Chin State in 2009 and 2010. They conducted quantitative and qualitative interviews with heads of over 600 households, and documented human rights violations at the household level. The quantitative approach used by the investigators lets us see the widespread and systematic nature of these abuses. The qualitative work, which includes the voices of Chin survivors of these atrocities, lets us hear something else—the voices of an enslaved and brutalized population asking for assistance in the struggle for justice, for freedom, and for life itself.

The results are devastating. The most commonly documented abuse, forced labor, was reported by 91.9% of all households, the highest rate yet reported for any region of this troubled country. This number includes Chin family members forced to porter military supplies, sweep for landmines, labor as unpaid servants, build roads, and do hard labor. Other documented violations include hundreds of cases of forced conscription into military service, beatings, torture, intimidation, rape of women, children and men by soldiers, killings, disappearances, and persecution based on Chin ethnicity or Christian faith.

What can the international community do about the human rights violations of this regime? 7 First, both international law and basic human dignity demand accountability for these crimes. We urge the United Nations to immediately establish a Commission of Inquiry into crimes against humanity in Chin State, and in all of Burma. Second, Burma’s neighbors and the regime’s allies, China, Thailand, Bangladesh, Malaysia, and most importantly India, must do much more to pressure the regime to cease and desist from its ruthless repression and lawless violence. Chin people, with well-founded fears of persecution, have sought refuge from their unstable homeland in India, Malaysia, and Thailand. These states have special responsibilities to do more to rein in the Burmese junta and to help create the conditions which would allow Chin people to be able to return to a safe and secure homeland. Finally, each and every one of us must do more. We must pay more attention to Burma and her suffering. We must pressure our leaders to address these atrocities. And we must support the courageous democracy movement, the clergy and the students, and the ethnic nationalities and their leaders, as they struggle to bring justice and freedom to this long-suffering country. Please do what you can. It is unconscionable that suffering as dire as that of the Chin people under Burma’s dictatorship should be allowed to persist in silence.

Be the first to review “Life Under the Junta: Evidence of Crimes Against Humanity in Burma’s Chin State” Cancel reply