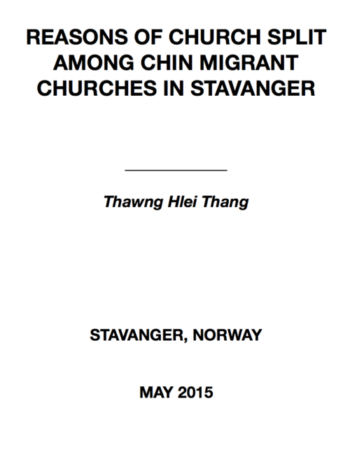 Reasons of Church Split Among Chin Migrant Churches in Stavanger

Theme of the Thesis The topic of the thesis is “Reasons of Church Split among Chin Migrants Churches in Stavanger.” Much has been written about church conflicts, division and consequences of these in the church community. The church has encountered and dealt with these conflicts throughout the centuries. One of the major issues occurred in the early Christian community was misunderstanding between Jews and Gentiles. The gentiles murmured against the Jews because their widows were neglected in daily distribution, probably meaning “in giving of sustenance to the poor and needy.”1 It shows that conflict was, is and will always be in the church for the church is composed of people who have different beliefs, values and practices. Every issue needs to be solved properly. Because, church divisions dismay and distress mature believers, disillusion new believers, cause havoc in the lives of pastor and their families.

By the help of the United Nations High Commissioner for Refugees (UNHCR) and the Norwegian Government, the ethnic minority group of the Chins in Malaysia and India were allowed to stay in Norway as a refugee. This program was started in the year 2002. The first Chin refugee, who arrived to Moi, in Norway is Mr.Van Thang. He arrived to Moi on November 28, 2002 from Malaysia and he was followed by others in 2003. It is estimated that there are about 1500 Chin refugees and are 16 Chin churches and 3 Chin fellowships in Norway. The churches established by the Chin migrants in Norway are now encountering with various issues such as denominational issues, doctrinal issues, form of worship, identity issues, leadership and power issues. These conflicts seriously endangered church growth and community spirit in many places. In some place, these issues have caused church split in Oslo, Langesund, Grimstad and in Stavanger. The spirit of church unity was divided. Reunion of the splitted body, family and church is difficult for both the parties.

The desire for oneness and unity among Christians and churches never results in actual and practical. Instead of having the ecumenical spirit which is unity in diversity, many churches are still encountering and dealing with this splitting issues. Church split occurred three times in Chin churches in Stavanger. It was happened two times in Stavanger Chin Church in 2009 and 2014, and was happened in Bethel Living Church in 2010. These splits seriously affected the lives and fellowship of the Chins community. In terms of church division, many questions were raised by the new generations. Why do the church split? What are the main reasons of church splitting? What kind of conflicts were in the Chin churches? Is it doctrinal issue? This research paper will explore the causes and conflicts that made church split among the Chin migrant’s churches in Stavanger.