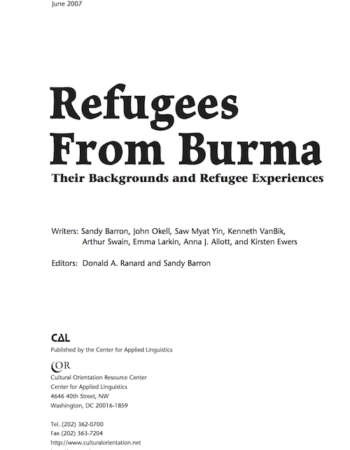 Refugees From Burma: Their Backgrounds and Refugee Experiences

Resource-rich and fertile, Burma was once regarded as “the rice bowl of Asia.” Under military rule since 1962, its fortunes have steadily declined, and today it is one of the world’s least developed and least free countries. It is also the source of one of the world’s most protracted refugee crises.

More than half a million refugees from Burma, also called Myanmar, are in mainly neighboring and nearby countries such as Bangladesh, India, Malaysia, and Thailand. Around 150,000 people, mostly ethnic Karen and Karenni, are living in designated camps in Thailand; some have been in these camps for more than 2 decades. Another 22,000 are in camps in Bangladesh that date back to 1992. Most of the remaining refugees have little choice but to eke out precarious lives as illegal migrants.

This profile provides information about the richly diverse histories, cultures, and backgrounds of the refugees from Burma, with a focus on the Burmans (the country’s majority ethnic group), the Karen and their various subgroups, and the Chin. It also looks at their experiences as refugees in camps in Thailand and Malaysia and the early experiences of their fellow countrymen and women who have already been resettled in the United States.

The profile is intended primarily for refugee service providers who will be assisting the refugees in their new communities in the United States. But others may find it useful, too. Teachers may use it to educate students about once faraway peoples, now struggling to find their way in a new land. Local government agencies—the courts, the police, the housing and health departments—may use it to help their staff better understand, and so better serve, the new arrivals.

For readers who wish to learn more about the peoples of Burma, we provide a list of books, films, and Web sites at the end of this profile. But ultimately the best source of information about the peoples of Burma is the people themselves, and readers who find this profile interesting should consider taking the next step—getting to know those whose cultures and experiences are described on these pages. Readers who do so will discover people who are eager to share their lives and stories.

Be the first to review “Refugees From Burma: Their Backgrounds and Refugee Experiences” Cancel reply