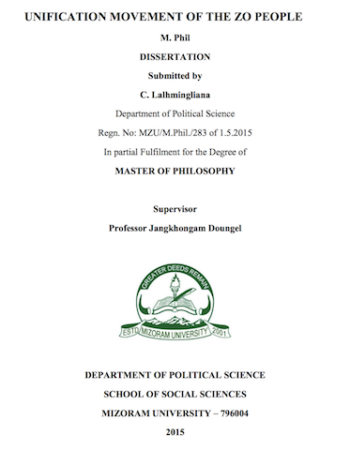 Unification Movement of the Zo People

The term DZO or ZO which is used as an inclusive name for different tribes of the Zo ethnic group is believed to be originated in China. According to Vumson, the term Zo or Jo was used for naming the Indo-Burman people.1Vumson further said that, because of the frequent contact of the Zo people with their neighbours, it is confused about which people should be designated as Zo or other names. Some writers including Vumson prefer to use the term “Zo” whereas some writers including B. Lalthangliana used the term “Mizo” to refer to the ethnic group. Therefore the two words will be used interchangeably throughout the research. When the British took possession of Bengal, the Bengalis told that the Zo were Kuki, which in Bengali word means Savage or wild Hill people. But the British came to know that those people do not called themselves as Kuki and the British used the term “Loosye” which later became “Lushai” to mention the Zo people2 . Tom Lewin, a British officers who tried to understand the people they are dealing with, after conducting a great research came to the conclusion that “The generic name of the whole nation is Dzo ”3According to H. Lalrinawma, the Zo people were one stock of the Mongoloids. Those Mongoloids were believed to be originated from China near the river of Yangtze and Hwang ho4 . Those Mongoloid race at present scattered in different parts of the world like Assam, Burma, Vietnam, Laos, and Thailand etc. Scholars have classified the whole human race into three broad races, such as the Caucasoid, the Negroid and the Mongoloid.