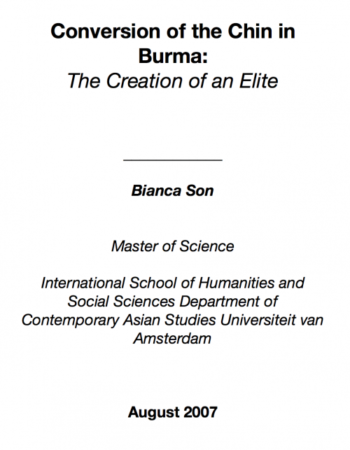 Conversion of the Chin in Burma: The Creation of an Elite

The northern Chin of Burma have a high conversion rate to Christianity. Using academic studies, interviews, political writings and missionary accounts, this thesis describes the various reasons for conversion, such as a shift in worldview (Hefner), rationalization (Geertz, Bellah, Weber) and cost/benefit ratio. In this case study, conversion seems to have fulfilled its central purpose for the Chin in creating an elite, a small group endowed with power. The converted Chin have achieved this role first by separating themselves externally from the Burman and internally from other Chin, and then by using the particular role of Christianity in the world to gain financial and political power. Externally, the separation from the majority, the Buddhist Burman, was a rejection of Burman rule. Internally, both the Tedim and Hakha, two administrative divisions of the Northern Chin Hills, tried to keep conversion exclusively to themselves, thus yielding the “prophet’s power” or Heilbesitz, as Weber referred to it, for themselves. Part of the Christian mission in the Chin Hills was to teach locals how to preach and convert their fellows. This is referred to as Indiginization. Growth of Christianity occurred once Indiginization took place and the Chin began to participate in the worldwide Christian movement. Also, needless to say, the locals understand the culture and language much better than the missionaries and in this way are able to reach more potential converts. Nowadays, the Chin use the Christian platform to raise world sympathy for the political situation in Burma, solicit funds to support Christian causes, and to gain legitimacy. The success of Christianity as a gateway to the world stage and power can be measured by the fact that some Chin go so far as to claim that the Chin were “chosen by God,” and it is their mission to convert the world. The thesis concludes that by converting to Christianity, the Hakha specifically have managed to elevate themselves as the elite of the Chin. This elite status allows the Hakha to represent the whole of the Chin on the world stage.

Be the first to review “Conversion of the Chin in Burma: The Creation of an Elite” Cancel reply