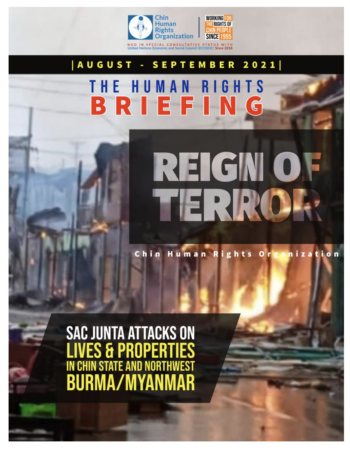 This document details human rights violations committed by SAC actors during August and September 2021. Attacks on the civilian population and civilian infrastructure initiated by the State Administration Council (SAC) junta have become increasingly relentless in western Burma/Myanmar since August 2021. Junta soldiers operating in Chin State and parts of Sagaing and Magwe Regions, under the Northwestern Regional Military Command based in Monywa, have conducted a campaign of unlawful killings, arbitrary arrest and detention, torture, and deliberate targeting of civilian and religious infrastructure.

During August and September, the numbers of attacks on civilian and religious infrastructure in western Myanmar where Tatmadaw forces have escalated military activities against civil militias from the Chinland Defense Force (CDF) in Chin State and the various Peoples Defense Force (PDFs) operating in Sagaing and Magwe regions has increased. These conflicts have led to radical violations of international human rights and humanitarian law, resulting in the massacres of civilians and causing civilian casualties, damage, and destruction to private and public property.

These ongoing violations constitute part of what the UN High Commissioner for Human Rights Michelle Bachelet described as the “human rights catastrophe” in her report to the UN Human Rights Council session in Geneva on Thursday, September 23.1 The violations documented by CHRO and other groups have clear patterns in which perpetrators’ actions are demonstratively deliberate and intended to cause harms to civilians. The destruction of lives, livelihood, and properties are directly linked to the military scorched earth counter-insurgency policy.

The notorious “four-cuts” doctrine, which has been employed in active war zones in ethnic areas for decades, is now being applied in the junta’s military campaigns in urban areas in the fight against local militia groups such as CDF and PDFs in western Myanmar/Burma. In implementing the four-cuts doctrine designed to cut off food, funding, intelligence, and recruits to the resistance groups, civilians are deliberately exposed to extreme violence and livelihood destruction. The deliberate and indiscriminate nature in which the policy is being applied in the current conflict circumstance has led to unnecessary deaths, destruction of livelihoods, and properties of civilians.

Be the first to review “Reign Of Terror” Cancel reply