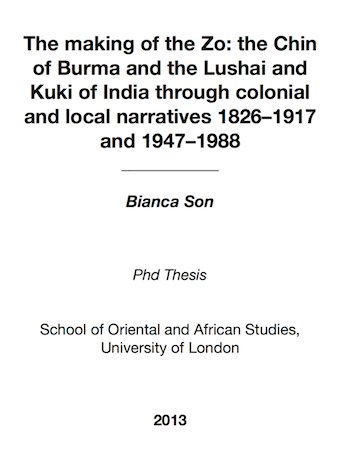 This dissertation illustrates the process of how the Zo of the Northern Arakan Yomas were reinvented into the Chin of Burma and the Lushai and Kuki of India during the British colonial period and in its aftermath after Independence in 1947/1948. Company officials, relying on informants, provided the first written accounts that justified delineation of the Zo mountains and the creation of the Chin, the Lushai and the Kuki.

Colonial civilization projects fostered the Zo to accept colonial dominance by providing opportunities to participate in the colonial state. Christian missionaries brought modernity in the form of literacy. After the Zo learned to read and also write, they began participating in their own reinvention and identity-making.

There were numerous factors that necessitated this construction and identity-making. The topography of the Northern Arakan Yomas makes them difficult to govern. The relative height and distance across the Northern Arakan Yomas prompted administrators to slice them up into manageable units. It is argued that this delineation, initially drawn for the ease of administration, was justified by the British using arguments about ethnicity, culture, and history. They, however, had fostered the re-invention of the past and with it the ethnicity and history of the Zo.

American Baptist and Welsh Presbyterian missions took charge of the western and eastern of the Northern Arakan, respectively. Each group of missionaries determined which Zo language to transliterate creating elite dialects, and thus elite, among the Zo. The reading elite in Asia, America and in Europe began to demand stories, anecdotes and articles about the Zo. Hence, writers and editors relying on very little information, made sweeping generalizations about the new British subjects in the hills.

It is further argued that the Zo eventually began participating in colonial endeavours through working with the British in the governing of the hills, by fighting for the Allied Forces in both World Wars and by serving the Government as police officers in the plains. They eventually began to reinvent their own histories in order to gain political agency on the world stage as well as to create elite groups among the Zo.

Be the first to review “The making of the Zo: the Chin of Burma and the Lushai and Kuki of India through colonial and local narratives 1826–1917 and 1947–1988” Cancel reply