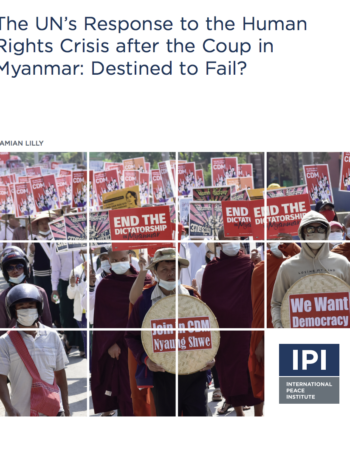 The UN’s Response to the Human Rights Crisis after the Coup in Myanmar: Destined to Fail?

Since seizing power in a coup on February 1, 2021, Myanmar’s military has launched a violent crack – down against anti-coup protesters—a campaign of terror that may amount to crimes against humanity. With violence spreading, there are fears that the country is slipping toward full-scale civil war and state collapse. The international community has appeared almost powerless to respond to this human rights crisis, reflecting a broader weakening of its resolve to prevent and respond to atrocity crimes over the last decade.

There is a sense of history repeating itself in Myanmar as the military junta acts with impunity while the international community rolls out the familiar playbook, to limited effect. Some states have refused to recognize the military junta and imposed bilateral sanctions, but others have continued engaging with it and failed to take punitive measures. The lack of international unity has prevented robust action by the Security Council, which has not taken even minimal measures like an arms embargo. A five-point consensus plan agreed by the Association of Southeast Asian Nations (ASEAN) has not been implemented but is the only realistic solution to the crisis.

While the UN has publicly condemned the military junta, this has not been accompanied by private diplomacy. The UN’s capacity to monitor, document, report, and analyze human rights violations has not matched the scale of the problem. There are few international justice mechanisms for holding members of the military accountable for atrocity crimes, though pursuing these could yield success in the long run. The international development and humanitarian actors present in the country have taken only minimal actions to address the human rights crisis. In view of the inadequate international response, national human rights organizations, protesters, and the civil disobedience movement have been left to fill the gap with little international support.

Compared to the scale and severity of human right violations occurring in Myanmar, the UN’s response—both as an intergovernmental body of member states and as a system of operational entities—has been woefully inadequate. While there is no simple recipe for halting the atrocity crimes, the UN could take a combination of measures at several levels:

• Ground the response in a political strategy: The UN urgently needs to develop a political strategy to address the crisis in support of the ASEAN process, including by revamping the office of the special envoy on Myanmar and creating an international support group while ensuring that human rights are at the center of any political process.

• Increase capacity for human rights monitoring and quiet diplomacy: An ASEAN-UN civilian protection monitoring mechanism should be explored as an option to help put an end to the violence by all parties, even if political support will be hard to achieve. The UN also urgently needs to increase its capacity to monitor human rights, even if done remotely, including through digital platforms.

• Provide clear leadership that encourages a less risk-averse approach: The UN secretary-general should visit the region to meet with all key actors and strengthen the UN’s partnership with ASEAN and other concerned states.

• Devise a whole-of-system approach to the UN’s response: The UN should introduce mandatory procedures for relevant UN entities to mobilize their resources and capabilities in response to human rights crises and deploy a senior planner to coordinate its political, human rights, humanitarian, and development actions.

• Support existing nationally or locally led protection efforts: The greatest forces for change have come from the protesters, people involved in the civil disobedience movement, and human rights and civil society organizations. The UN should be more forthright in supporting these efforts and the crucial protection role they are playing.

Be the first to review “The UN’s Response to the Human Rights Crisis after the Coup in Myanmar: Destined to Fail?” Cancel reply