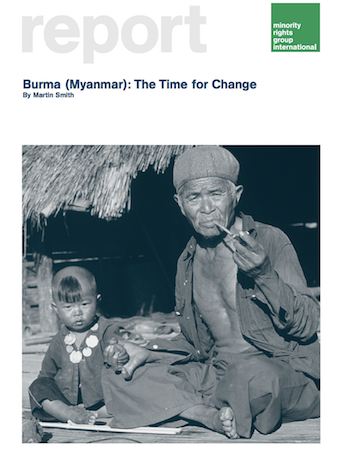 Burma (Myanmar): The Time For Change

As this Report goes to press there is a chance, however small, that Burma and its peoples may be turning towards peace. The United Nations (UN) Special Rapporteur on the Situation of Human Rights in Myanmar, Mr Pinheiro, stated at the end of 2001 that this is the country’s ‘golden opportunity’ regarding peace and reconciliation. The military government has been holding secret talks with Aung San Suu Kyi, leader of the National League for Democracy (NLD), whose most visible result has been her release from house arrest in May 2002. In addition, some 15 separate ceasefire agreements have been made between the authorities and armed ethnic opposition groups in recent years. Many of the ethnic minority and indigenous communities now want to be included in any peace and reconciliation negotiations. It is therefore in this tri-partite process – bringing together the military government, the NLD, and the diverse ethnic minority groups – that the best hope for a peaceful and democratic future for Burma lies. Yet Martin Smith, the author of this new report, is necessarily cautious about expressing optimism regarding the outcome of these talks. Progress is slow and despite the ceasefires in many areas, conflict is still a reality in many other parts of the state, human rights abuses continue, and the military government remains firmly in power. Aung San Suu Kyi’s NLD party in 1990 won Burma’s first and only general election since the military seized power, but the military government still refuses to recognize the election result. Much has been written about the human rights violations under the military government. These have been all-pervasive since General Ne Win’s coup in 1962, and during the subsequent military government of the State Law and Order Restoration Council (SLORC) – since renamed the State Peace and Development Council (SPDC). The abuses have been well documented and include: the use of child soldiers, forced labour, indiscriminate use of anti-personnel mines, rape and other forms of torture. But whereas the political repression of NLD activists has been the focus of ongoing international criticism, less attention has been paid to the gross and systematic human rights violations against ethnic minority civilians, particularly in the Chin, Karen, Kayah, Shan and Rakhine states. Since Burma gained its independence from Britain in 1948 it is estimated that over 1 million people are believed to have lost their lives in violent conflict, and around 2 million have been internally displaced. Much of this conflict has been in ethnic minority regions, between the military and armed opposition groups. It is not always so well known that Burma has a rich ethnic diversity, with its population speaking over 100 different languages and dialects. Ethnic minorities and indigenous peoples are believed to represent approximately one-third of the state’s 52 million inhabitants, with an estimated 2 million Chinese and Indian population. While Buddhism remains the largest religion in Burma, there are sizeable Christian and Muslim minorities. Decades of conflicts have won little either for the government or for fighters from the many armed opposition groups. Meanwhile poverty flourishes, and education and health care are seriously neglected. Burma is among the world’s least developed countries. It is the world’s largest producer of illicit opium and faces one of the most serious AIDS epidemics in Asia. Refugees continue to flee the state for surrounding countries, and women and girls in particular are trafficked elsewhere as prostitutes and cheap labour. Yet many among the authorities and the armed opposition groups are war-weary. If an opportunity for peace does exist now, it may not be available for long, and therefore the UN, ASEAN, EU and other key actors must make supporting the process of dialogue, political reform and conflict resolution a priority at this time. History has shown that a prerequisite for the success of this process is that ethnic minority and indigenous communities must be able to play a full part in the future of Burma, and have their rights promoted and respected. A new Constitution for Burma should therefore be inclusive and restore ethnic minority rights that were originally guaranteed at Burma’s independence. The alternative, of continued repression and bloodshed, is no way forward.

Be the first to review “Burma (Myanmar): The Time For Change” Cancel reply