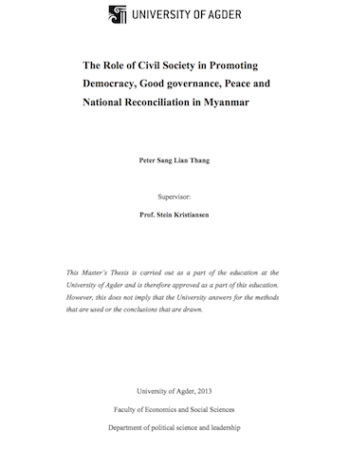 The Role of Civil Society in Promoting Democracy, Good governance, Peace and National Reconciliation in Myanmar

Myanmar1 was known for decades as one of the most isolated nations on earth, but after the 2010 election, the country is rapidly moving forward to be an open, free and integrated part of the international community, thereby bringing positive hope and expectation to the Burmese people and democratic nations worldwide. With an accelerating speed of reforms taking place, the government that used to be under the command of one man finds governing the whole reforms process as major challenges. Therefore, the government becomes consciously aware and acknowledges publicly that citizen’s participation in all sectors is indispensable to have better governance and peace in multi-ethnic and multi-cultural Myanmar.

The thesis is a qualitative study primarily investigating and analyzing the role of Civil Society (CS hereafter) in promoting democracy, good governance, peace, and national reconciliation in Myanmar. The study firstly reviews the traditional concept of CS and reconceptualizes it to better suit the cultural and political context of Myanmar. The study also identifies different CS actors and groups them into different categories; analyzes challenges, success, and constraint in relation to their respective relationship with the people, the state, and among themselves. To support my hypothesis, field research was also conducted in March 2012 in Yangon, Myanmar.

The study explores the existence and significance of CS mainly in three different periods in Myanmar’s modern history; pre-independence (prior to 1948), after independence (1948-2010), and from the 2010 election to this date. In the process of exploring, this study identifies different types of CS actors inside Myanmar, across the border, and in other countries actively working for democracy, good governance, peace, and national reconciliation. The study also investigates the relationship between SC and the people, the state, among different CS actors and also challenges faced under oppressive military regime and prospects under the current political atmosphere.

With a growing interest in the CS role and impact they generated, some even contend that reforms in Myanmar are products of CS active involvement. This study however argues that despite the important and significant contribution of CS, their roles were rather limited to social humanitarian goals rather than bringing political changes because of the harsh and yet systematic restriction of military regimes. The recent rapid yet systematic shift in the political landscape particularly after the 2010 election has opened wider opportunities for CS to engage more effectively across the country’s socio-economic spectrum. The study also investigates and compares changes in CS roles prior to and after the election in 2010.

Through qualitative combined with empirical analysis, the study confirms that CS plays a significant role in promoting democracy, good governance, peace and national reconciliation in Myanmar. The author finds though that CS still lacks the capacity and human resources necessary for a more coordinated and collaborative force to generate an effective and vibrant impact on reform in the three areas; democracy, good governance, and peace or national reconciliation. The thesis concludes with a summary of the discussion, findings, and suggestions for stakeholders and future researchers in order that the future role of CS is more effective in enhancing the current reform process.

Be the first to review “The Role of Civil Society in Promoting Democracy, Good governance, Peace and National Reconciliation in Myanmar” Cancel reply