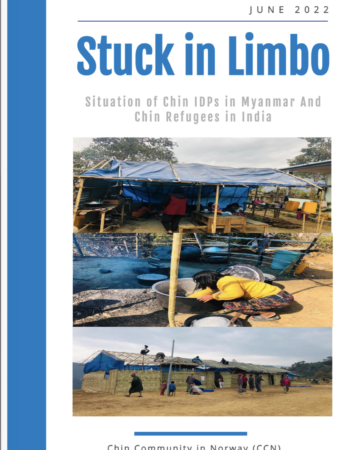 Stuck in Limbo: Situation of Chin IDPs in Myanmar and Chin Refugees in India

More than a year of terror has passed since the military in Myanmar seized state power on February 1, 2021. Still, Myanmar faces worsening humanitarian catastrophes with multi-dimensional effects on the people of all walks of life across the country. What began, some believe, as a surgical intervention aimed at reinforcing the military grip on power of the nation’s politics has now turned into an unprecedented crisis resulting in the killing of 1,557 people, imprisonment of at least 12,173, the destruction of properties worth multi-million dollars and the internal displacement of additional 560,900 people on top of an existing 370,000 who had fled their homes previously.1

Since the coup, more than 50,000 Chins have been internally displaced on top of the same number who had previously been displaced, and approximately 50,000 have fled to the neighboring state of Mizoram, India, as refugees. According to the UNHCR, since the end of March 2021, approximately 15,700 refugees, including women, children, and older persons from Myanmar have crossed into Thailand to flee the conflict and seek protection.2 As of January 2022, the number of verified refugees, mainly the Karen people in Thailand was 91,401.3 By the end of December 2021, Malaysia had some 155,400 from Myanmar, including 22,570 Chins refugees.4

Moreover, as many as 200 Chins have lost their lives, and approximately 900 Chin were arrested after the military coup. By the end of April 2022, the military had destroyed and burned down at least 11,417 civilian houses at 296 locations in Myanmar, with Chin state being one of the worst-hit states, with 1147 houses destroyed. As part of their campaign against other religious minorities, the military also targeted Christian churches and buildings across Chin state. According to the CHRO, the military has burnt more than 50 Christian churches and religious buildings.

As the military continues to wage its campaign of terror against the Chin people, we are likely to see more casualties and an increase in the number of IDPs in Chin state and refugees in India. We are already witnessing a massive humanitarian crisis on the ground, with the Chin IDPs and refugees not having adequate food, drinking water, medication, and shelter. More than half of the population are women and children, with many being badly traumatized by their terrifying experiences under the violent military attacks.

Conditions in the camps are woefully inadequate, unhealthy, and overcrowded. The temporary makeshifts often built with tarpaulin and bamboos are easily flammable and not stable enough to withstand strong wind.

Myanmar Humanitarian Response Plan 2022 estimates that around 6.2 million people will need life-saving humanitarian support in Myanmar and requests 826 million USD.5 The global Chin Humanitarian and Relief Committee (GHRC), a group that collects and helps manage funds from Chin churches and community organizations worldwide, estimates that at least 10 million USD will be immediately needed to accommodate the deteriorating humanitarian crisis in Chin state. The people who need more urgent help are the ones who are forced to leave their homes and seek refuge elsewhere. For the Chin refugees and IDPs, despite efforts being made by the local CSOs, churches, and overseas Chin communities to help alleviate the situation, the growing needs cannot be met by this alone. Short-term needs such as food, water, and shelter are being met, but the more critical and potentially volatile issues have yet to be addressed: where will the Chin refugees eventually go? Moreover, the long-term solutions, the right to property, healthcare, work, education, and a secure future, have not been on the agenda yet.

Although realities on the ground indicate only a worsening situation with no immediate solution in sight, the people continue to engage in fierce resistance with incredible courage and resilience. “We are willing and ready to sacrifice everything for freedom, self-determination, and our future generation” is the general sentiment expressed by most people that our team has spoken with on the ground. The recent ramp-up attacks, which is part of the Anawrahta Operation on the Chin people, particularly in Thantlang and Mindat towns, have forced at least 40,000 civilians out of their homes and sought refuge elsewhere in Chin state and the neighboring state of Mizoram, India. IDPs and refugees on the ground expressed their feelings and explained their situation as extremely difficult and with little hope for resolutions anytime soon.

Data collected during the field trip shows that the number of internally displaced people and refugees has been increasing, indicating that the humanitarian crisis is likely to worsen as time goes by. It also shows that international humanitarian organizations have been slow and ineffective in addressing displaced Chins situations within Myanmar and India. This dire situation requires immediate and effective actions to terminate military dictatorship and violence, build substantive federal democracy, and address people’s developmental and humanitarian needs.

Be the first to review “Stuck in Limbo: Situation of Chin IDPs in Myanmar and Chin Refugees in India” Cancel reply